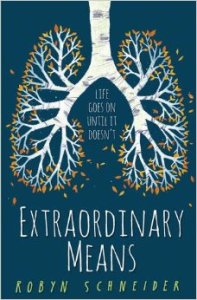 I recently read Extraordinary Means by Robin Schneider which is my favourite book of 2015 so far that has been recently released. It tells the story in the dual perspective of two teenagers. These teenagers  have contagious Tuberculosis and are sent to a sanatorium out of the public’s way.

The book is written in dual perspective and is the only book I have read in YA that shows how life is in a sanatorium for teens. I don’t want to say this but in a way it reminded me of the fault in our stars due to the writing style which I prefer massively over the writing in The Beginning of Everything (Robin’s other book). Truth be told, I almost cried but had to hold it in you know because I was in public and I did not want to put it down because it really drew me in throughout the whole book most of the time I could not tell what was going to happen next and some of the things that did happen really surprised me.

This book is truly amazing and I definitely recommend it to anyone who reads this post. If you get the chance I would highly recommend you read it because it will give you the feels.

One thought on “Extraordinary Means by Robin Schneider|Book Review”